The Sequel to 'Daughters of Liberty'!

Native Son is the sequel to Daughters of Liberty. If you love great historical fiction with a blend of romance and intrigue you will enjoy these books immensely!  If you've never tried this genre, I highly recommend you do.

Native Son
Heritage Edition
by
Joan Hochstetler
Brigadier General Jonathan Carleton has pledged his allegiance to the newly elected commander of the rebel force, General George Washington. But his heart belongs to fiery Elizabeth Howard, who charms British officers by day and by night delivers their secrets to the Sons of Liberty. Their plans to marry are put on hold, however, when Washington orders Carleton to undertake a perilous journey deep into Indian territory, while Elizabeth continues to spy on the British. Within weeks, she learns that far out in the wilderness Carleton has been captured by the Seneca. Despite all attempts to find him, his fate remains shrouded in mystery.
Forced to abandon Boston, British General William Howe prepares to unleash an overwhelming invasion force against Washington’s badly outmatched army at New York City. And reports begin to filter back from the western frontiers that a new Shawnee war chief named White Eagle is leading devastating raids against both British and American outposts in Ohio Territory.

Historical fiction
ISBN: 9781936438099
$15.99
Web site: www.theamericanpatriotseries.com
Amazon: http://www.amazon.com/Native-Son-American-Patriot-Book/dp/1936438097/ref=sr_1_3?ie=UTF8&qid=1325640801&sr=8-3
Christianbook.com: http://www.christianbook.com/native-son-american-patriot/j-m-hochstetler/9781936438099/pd/438099?item_code=WW&netp_id=959481&event=ESRCG&view=details
Award-winning author J. M. Hochstetler is the daughter of Mennonite farmers, a graduate of Indiana University, a professional editor, and a lifelong student of history. A graduate of Indiana University, she has published three historical novels set during the American Revolutionary War, Daughter of Liberty, Native Son, and Wind of the Spirit, the first three books of the American Patriot Series. Book four, Crucible of War, releases in 2012.

Her contemporary novel One Holy Night, a retelling of the Christmas story set in modern times, was the Christian Small Publishers 2009 Book of the Year and finalist for the American Christian Fiction Writers 2009 Carol Award. An editor with Abingdon Press for many years, she is currently the publisher and editorial director of Sheaf House Publishers, a Nashville area small press.
Posted by Rita Gerlach at 8:39 AM 1 comment:

Summer of Promise by Amanda Cabot 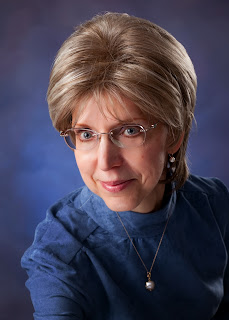 Dear Reader,
One of the questions I’m often asked is how I get the ideas for my books. The answer is that oh-so-frustrating “It depends.” And it does. Each book is different from every other.
Those of you who’ve read my bio know that I’m an avid traveler, and so you probably won’t be surprised to learn that Summer of Promise was inspired by a trip. I’ve always been fascinated by the pioneers who traveled West in covered wagons, so what better place to visit than Fort Laramie, where all the wagon trains stopped to rest and stock up on supplies before crossing the Rockies?
At the time that I planned the trip, I had no intention of setting a book there. It was simply a chance to escape the seemingly unending work associated with moving into a new house. But inspiration strikes when you least expect it.

When we arrived at the fort, I was struck by several things. First of all, it didn’t look like my image of a Western fort. There’s no stockade surrounding the garrison. Instead, it’s open and seemingly unprotected. The second surprise was that the buildings didn’t fit my picture of Army construction. The barracks and the officers’ housing were constructed of a variety of materials and, combined with the central parade ground, made the fort look like a New England village. The third surprise was that, although this was once a military installation, it felt peaceful. In other words, it wasn’t what I had expected. 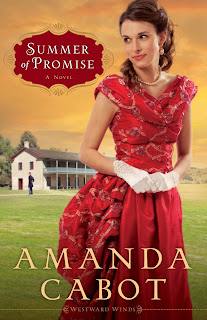 Prior to that day, if someone had asked me to write a book set at Fort Laramie, I would have assumed that it would take place during the great migration and that the heroine would be part of a wagon train. But as I walked around the fort and learned more about its history, I became fascinated with its final days. During its last decade of existence (the 1880s), Fort Laramie saw no wars, and not even much in the way of conflict. Instead, it was a place where officers lived in relative luxury, where their wives held teas and balls, and where the parade ground boasted gaslights and birdbaths.
I was hooked. And so, in the space of an afternoon, when all I had expected was a little recreation, I had the beginning of a book. As it turned out, not just one but three. I realized that Abigail, the heroine of Summer of Promise, was one of three sisters and that each of them deserved her own book.  The Westward Winds trilogy was born.
If you journey with Abigail and Ethan to Fort Laramie in the summer of 1885, I hope you’ll come to love the old fort as much as I do.  And, if you’re ever in Wyoming, don’t pass up the opportunity to visit it in person.  Who knows?  You might come away with an idea for a book … or three.
Blessings,
Amanda
www.amandacabot.com
Posted by Rita Gerlach at 12:00 AM No comments: 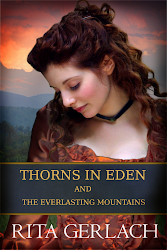 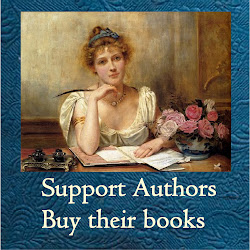 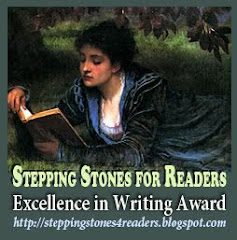 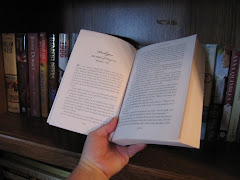